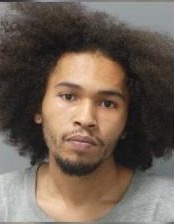 24-year-old Carlos Young has been charged with the shooting death of 28-year-old Eric Rogers.

Rogers was killed April 27th around 9:45 a.m. near 14th Street and Chouteau. on April 27. Rogers was shot several times in his upper and lower extremities and was pronounced deceased at the scene.

Young was later apprehended and charged with second-degree murder and armed criminal action in the case.