OFFICER HOSPITALIZED AFTER WOMAN HITS HIM WITH HER VEHICLE 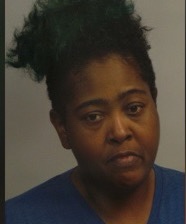 A woman was arrested after striking an officer with her vehicle while trying to flee a crime scene in Hazelwood.

40-year-old Shanice Davidson, of St. Louis, was charged with two felony counts of resisting and interfering with arrest for her vehicular assault on a law enforcement officer.

On Aug. 18, Davidson was pulled over for having an expired temporary license plate on her car in Hazelwood, Mo. After running the suspects identification, the police discovered that she had an active felony warrant, then the woman sped off.

A week later on Friday, a Hazelwood officer responded to a “keep the peace” call in the 6000 block of North Lindbergh when Davidson was again observed getting into her car and was ordered her to step out of it.

According to documents, the 40-year-old quickly locked the car doors and put the car in reverse. The officer was then pinned against a parked car and struck by the side mirror. He was injured and evaluated at an area hospital.

Hazelwood officers attempted to stop the vehicle, but the driver failed to stop. According to the Hazelwood Police Department: a Starchase GPS device was eventually deployed, and the pursuit was terminated,”

Davidson was eventually arrested and is being held on a $200,000 bond.