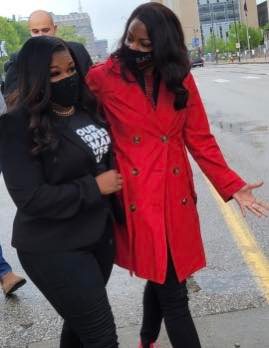 Mayor Tishaura O. Jones, Congresswoman Cori Bush Applaud Board of Aldermen’s Rebuke of Homer G. Phillips Name on North City Medical Facility
Today, St. Louis Mayor Tishaura Jones and Congresswoman Cori Bush (MO-01) released the following joint statement following the passage of Resolution 138 at today’s full Board of Aldermen meeting. Resolution 138 deems the naming of a new medical facility ‘Homer G. Phillips Hospital’ as “inappropriate cultural appropriation” after the new facility faced community outcry and protests:
“Homer G. Phillips Hospital was a beacon of Black leadership in St. Louis, training an entire generation of Black doctors, nurses, and health care workers who would go on to serve communities not just across our city, but our entire country,” said Mayor Jones and Congresswoman Bush. “Profiting off of Homer G. Phillips’ name on a small 3-bed facility that will fail to meet the needs of the most vulnerable in our communities is an insult to Homer G. Phillips’ legacy and the Black community. We urge the developers of this project to heed the call of former Homer G. Phillips nurses, advocates, health care workers, community leaders, and St. Louis City residents who are demanding respect by changing the name of this facility.”