INFAMOUS SOLD OUT NO LIMIT CONCERT ENDS WITH MIXED REVIEWS 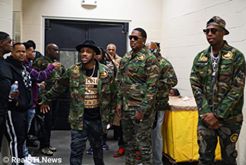 The legendary No Limit crew was in St. Louis last night to perform for their sold out concert. The camp has not been to our beautiful city since August 1999, so the excitement for one of the biggest rap groups ever to come back and perform their biggest hits was highly anticipated.

Fans poured into the Chaifetz with their army fatigue on as if they were preparing for boot camp. Hairstyles from the 90s were seen throughout the hallways along with a few Kangol hats, Versace shirts and jerseys.

The show got off to a great start with some comedy along with the infamous DJ Kut playing some of the hottest songs to keep the energy hyped.

As time went on, many fans became irritated that No Limit wasn’t on the stage after sitting through opening acts for over an hour. After awhile, the No Limit Camp hit the stage and the crowd went crazy.

It became obvious to some after a few minutes that the group had not been on the stage together in awhile due to their stage presence. There was far too many extras on stage in the background wearing the same gear as the artists, so at times it was hard to decipher who was who. A few artists fumbled their lyrics or did snippets of their hits.

But let’s be fair, though the concert was a bit unorganized, St. Louis can be very hard on people. We also have some people who tend to jump the bandwagon instead of leading with their own opinions.

Facebook was flooded with mixed reviews of the show. Some saying they wanted their money back while others were saying they had a great time despite the minor mishaps. Some of the same people who are complaining were seen dancing and smiling often during the concert and stood in line for the after party. *we have receipts*

A RSTLN reporter spoke with one of the No Limit artists Sunday morning and he agreed that the show was unorganized, but he felt it had nothing to do with the promoter, but with the camp itself. He understood the crowd booing and being agitated at times.

But all in all, a lot of concert goers did have a good time at the concert because we were around a mature generation of people that enjoy No Limit’s music then and now. This show was like a reunion for us 70 and 80s babies. People were seen hugging and catching up on old times with old friends or family they hadn’t seen in years. There was no tension in the air and it was beyond obvious that being in such a moment in that arena, many were appreciative.

Salute💪🏽 Master P for going in north city and talking to the youth along with his donations! That part is priceless.