HAVE YOU SEEN THESE VEHICLES? 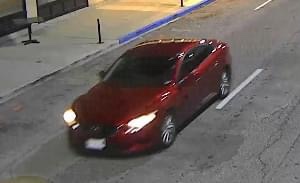 Do you recognize these vehicles? Detectives need assistance locating them relative to a Robbery and two Carjackings that occurred this week in Downtown. Anyone with information that wants to remain anonymous is urged to call CrimeStoppers at 866-371-TIPS (8477). Summaries of the incidents are below:

Incident: Robbery 1st (Carjacking)
Location: 200 block of N. 4th St
Date/Time: 07/19/21 @ 0519
Victim: 44-year-old Black Female
Suspect #1: Black Male, 16 to 19 years old, thin build, medium brown complexion, wearing a black t-shirt, black pants, with a black shirt covering his head and face, and wearing white shoes
Suspect #2: Black Male, 16 to 19 years old, thin build, medium brown complexion, low afro hairstyle, wearing a black hooded sweatshirt with lettering, black torn jeans, a red belt, and carrying a black cross-body bag
Suspect #3: Black Male, 16 to 19 years old, thin build, medium brown complexion, medium afro hairstyle slightly “locked,” a t-shirt (white on the back and red on the front with multiple images of Michael Brown), and dark pants
Officers responded to North Broadway and Pine for a “Carjacking – Just Occurred” call where the victim, an Uber driver, stated she responded to a request to pick up the suspects at the Marriot Hotel. Upon arriving, the suspects entered the vehicle. The victim stated that while stopped at a red electrical signal at N. 4th Street and Pine Street, one of the suspects produced a handgun and pointed it at her neck. The suspect then announced a carjacking and ordered the victim out of the vehicle. The victim complied, leaving her purse behind, and the suspects fled in the victim’s vehicle. Prior to the completion of this report, officers located the vehicle unoccupied in Saint Louis County. The victim was not injured. The investigation is ongoing.

Incident: Robbery 1st Degree
Location: 800 block of St. Charles
Date/Time: 07/21/21 @ 2140
Victim #1: 45-year-old White Male
Victim #2: 31-year-old White Male
Suspect(s): Two Hispanic or Light Complexion Black Males, 14 to 18 years old, medium build, wearing dark clothing
Officers responded to a call for a “Hold Up” where the victims stated that they were walking east on St. Charles when the suspects approached them on foot. The victims stated that one of the suspects pointed a handgun at the victims and then announced a robbery demanding money and the victim’s phones. Both victims complied and relinquished their property, and then the suspects fled the scene on foot. The victims were not injured. The investigation is ongoing.

Incident: Robbery 1st (Carjacking)
Location: 700 Block of Pine
Date/Time: 7/23/21 @ 0405
Victim: 53-year-old Black Male
Suspects: Two (2) Black Males, 18 to 21-years old, wearing masks
Around 4:15 a.m., officers received a call for a “Carjacking – Prior” in the 800 block of Spruce and located the victim uninjured. Preliminary investigation suggests the victim picked up the suspects near the above location. However, shortly after entering, the suspects pointed firearms at the victim and demanded he exit. After the victim complied, the suspects fled in the victim’s 2017 Mazda 6. The investigation is ongoing.