HAPPY BIRTHDAY TO THE KING OF POP 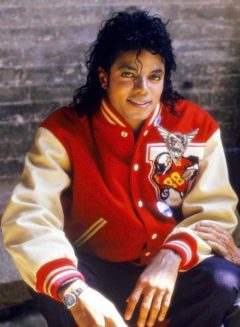 Today we salute and yell to the heavens, happy birthday Michael Jackson. Michael Jackson transformed the face of the pop culture with his music expertise. His songs told stories that many related to. Jackson was born August 29, 1958 in Gary, Indiana to boxer and crane operator, Joseph Jackson and Katherine Ester Scruse, who was a department store clerk. Michael shared a home with his 3 sisters and 5 brothers.

Jackson gave his first public performance at the age of 5, performing Climb Every Mountain. From there, he and his brothers soared creating hits such as The Love You Save, I’ll Be There, Got to Be There, and I Want You Back. After awhile, Jackson felt being in a group was hendering him and his talent, so he decided to go solo.

Billie Jean was the first song by a black artist to be aired on MTV. Jackson wowed the world with the Moonwalk and his creativity, not to mention his looks were dreamy. Around that time is when his mother noticed his vitiligo on parts of his body. In 1993, he was officially diagnosed with the skin disease.

When he released his 1983 album ‘Thriller” he took the world by storm yet again. The album sold over 65 million copies. Michael continued to get bigger and grabbed the attention of Pepsi-Cola. He signed a $5 million deal with the company and got injured while filming a commercial for the brand. Sparks flew during a planned explosion causing burns to his scalp and face, which lead to the beginning of plastic surgery. Michael was known to have low self esteem, so this opened doors to bring changes to things he did not like.

Jackson was known to create mini films to express his inner thoughts. His most expensive video to date is the ‘Scream” video he did with is sister Janet. The video cost $7 million. In the video he had fun and felt comfortable because he was with his favorite sister. The both of them loved the Three Stooges and always did comedy skits together. Jackson escaped death when he missed a meeting at the Twin Towers on 9/11. That day left him in heavy depression. He donated money anonymously to victim’s families because he was so heartbroken by what happened. Michael continued to blossom and aimed to have children, so he allowed surrogates to do so. He would tell people they were his children because in his heart they were. Many speculations over the years about molestation came about, and many were debunked. There were too many ‘Yes’ people around him. For awhile, he admitted he was lost and confused about life.

Jackson eventually decided before he retired, he wanted to give his fans one last show. He got with AEG Live Productions and they put together multiple shows, but eventually became 50 shows due to ticket sales. A reporter on the team of RSTLN who is a die hard fan of MJ, bought tickets to his ‘This Is It” concert, but never made it due to Mj pasing away. The King had 23 Guinness World Records, 40 Billboard Awards, 13 Grammys, and 26 American Music Awards, but he always said nothing topped his fans and the love they gave him.

Michael Joseph Jackson, we salute you for sharing your talent and love with the world. Happy Birthday